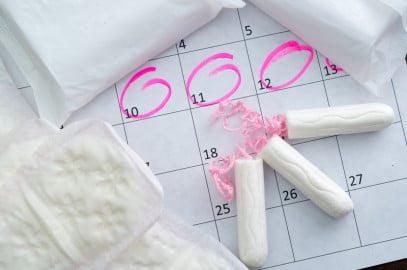 Periods are known to differ from woman to woman, especially in terms of blood flow, duration, and pain. Therefore it may be difficult to determine whether your symptoms have passed into the threshold of abnormality. To help you distinguish potentially serious issues from normal quirks in your cycle, we’ve put together a list of what constitutes abnormal when it comes to your period.

Menstrual cycles can take anywhere from 21-35 days to complete, but most commonly women get their period every 28 days. However, if you notice no menstrual flow for more than 6 weeks, you may be experiencing a skipped or missed period. While most people associate missed periods with pregnancy, there may be other causes such as hormonal imbalances, which could indicate polycystic ovaries syndrome {PCOS}, or early menopause. Menopause normally occurs after the age of 45, therefore if you are consistently missing your periods between the ages of 35 and 45, or younger, you should speak to your doctor. Early or premature menopause may cause mood irregularities and infertility issues, both of which can be helped with appropriate treatment.

Since period flow can vary among women, it can be difficult to determine whether your bleeding qualifies as abnormally heavy. Typically, symptoms of heavy bleeding include:

Not only can heavy bleeding interfere with your daily life, but it may also be evidence of a more serious health issue such as PCOS, endometriosis, and uterine or cervical cancer.

You know your body better than anyone else, so if you feel that something might be wrong, even if your experience doesn’t quite match what we’ve outlined above, do not hesitate to reach out. Every woman’s body and cycle works differently, therefore something that is normal for another woman, may not be for you. At PWOG, we take the time to understand your concerns and the nuances of your issues. Contact us today to schedule an appointment.